So I’ve had my Apple Watch since June I got it through a deal Telus had on at the time. In the plan there was a 10$ per month charge to use data on my watch. This has never worked, I’ve called in multiple times, went to the telus store were they called in and they haven’t been able to fix it so I am done with them, I want to cancel my contract and just pay the remainder of the cost of the Watch. They are being very difficult about this because I don’t want to pay the fee for leaving the contract and I think I deserve a refund for the data charges I was unable to use, they claim I signed a contract and its not their fault. Is there any way out of this for me or am I wasting my time arguing?
0 Kudos
Reply
1 REPLY 1 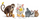 Sorry to hear about this.

There are a few things to consider when it comes to Connected devices, here you can check more details https://www.telus.com/en/mobility/connected-devices?linkname=Connected_Devices&linktype=ge-meganav

If conditions are met and you are still unable to use data with your connected device, our tech support over the phone should be able to further investigate.