I recently installed the Boost Wifi and the Telus techs upgraded me to the actionet 3200 at the same time as the 2200 was too slow (their words!)

All of my devices work fairly well, but a Samsung smart TV in my daughter's room won't stay connected consistently. When I look in the boost app, its only connecting at 2.4ghz (TV is capable of 5Ghz and used to connect to my old router on that band) -- When watching Netflix, it either disconnects or it buffers every few minutes. It is the only device in the house that does this!

Is there anything I can do to ensure that the TV and the Wifi will stay locked-in on the same channel? I suspect it has issues with the boost checking signal strength and whether it should shift the device between 2.4/5 band, but I think this causes the TV to disconnect or at least interrupts the connection enough that Netflix drops or buffers the stream. The TV is 10 feet away, on the other side of a wall. TV worked flawlessly with my TP Link Archer 3200 that I used to have on another floor. So the problem lies in the Boost and TV just not getting along! (Both my boost units are connected to the router via Ethernet, one on ground floor, the other in our master bedroom on the second floor. -- The problem device is in the next room!)

It would be nice if you could reserve an IP address in the APP and lock the wireless band for specific devices so I could force the connection. If I do that on the main router, will the Boost pick up the reservation?

Any ideas what I can do (other than trying to run an Ethernet cable to the TV?) to diagnose and keep the connection? I may try moving the boost into her room to see if that does anything or if all else fails, plugging my archer in for just that one device ( I don't need multiple networks in my house though!)

It's unfortunate that most smart TVs cannot specify which wireless band to connect to the Boost Wi-Fi. I am able to select 5GHz in a Windows 10 device whereas If automatic was selected the connection would be 2.4GHz. If the TV is only 10ft away then the Boost Wi-Fi ought to connect using the 5Ghz band. I am streaming sports and there hasn't been any disconnections or buffering during live broadcasting.

You are correct on this part when suspecting the Boost Wi-Fi has issues checking signal strength and whether the Boost WI-Fi should shift the device between 2.4/5 band. Though the TV is stationary unlike a mobile device which is moving and so the Boost Wi-Fi shouldn't be shifting between the 2.4/5 band.

The T3200M is unable to specifically reserve an IP address for certain devices. It seems to be done automatically once the MAC address connects to the T3200M. As for locking the wireless band for specific devices, the device would have to lock it down and not the Boost Wi-Fi or T3200M just as my Windows 10 device example did.

I hope you're able to resolve your wireless band issue.

I did some mucking around and I had an unused extender (WCB300?) and I connected it up via Ethernet and pass through to my daughter's Optik box, and then placed it behind her TV. I turned the 2.4 GHz band off so its only operating on 5G and it seems like it is working well so far. Netflix has been on for over an hour and no buffering or stalling out.

I also turned off the Wifi on my Telus 3200M as well. So the only Wifi I have in the house is the Boost and the extender in my daughters room. I'll leave it a few days and see how that goes.

I think this issue is something that Telus could provide some advanced options for in their App. Surely I'm not the only one with older devices that may have compatibility issues. Telus should provide a method of i) assigning/reserving a fixed IP address for specific devices. ii) ensuring that devices that only support certain bands (2.4/5) can be assigned to that band. Additionally, if you could assign a fixed device to a certain boost units (what do you call them, Pucks?) so that its not trying to switch them (it doesn't make sense for stationery objects -- I know its probably trying to balance the load, but I'd rather give some devices priority that others.)

I'll report back if this resolves my issues. I hate having multiple networks and SSID's. I was trying to prevent that with the boost in the first place. But if its only for the one TV, I can live with that.

I think this issue is something that Telus could provide some advanced options for in their App. Surely I'm not the only one with older devices that may have compatibility issues.

Supposedly there is going to be a new firmware update for the T3200M soon. What improvements and features there will be remains to be seen. I also wouldn't doubt that the "My Wi-Fi" app for the Booster Wi-Fi would also be updated at about the same time.

I, personally use the Boost WiFi for the range issues with the T3200M such as having a good wireless signal in the basement and to the garage. Some advanced options for the "My Wi-Fi" app would be nice as long as simplicity isn't sacrificed to the average non-tech savvy user.

I'm just waiting for that update since I haven't restarted the T3200M from the last update in November last year. 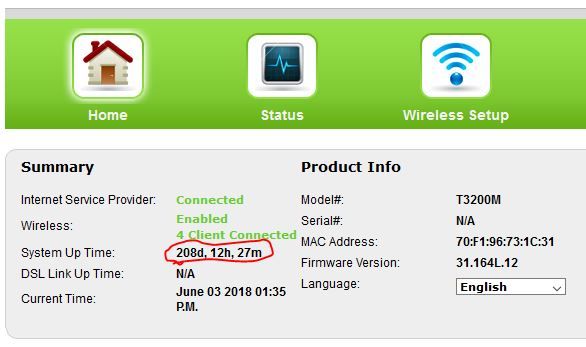 It can cause  problems if they are,  and telus recommends that you either disable wifi on the t3200 or run different ssids.

It's unfortunate that most smart TVs cannot specify which wireless band to connect to the Boost Wi-Fi.