Hi, I totally agree with you and Telus is so vague about any updates or info about this. It's always the same answer they give which basically is nothing and they always tell people to check their website lol. I've started to talk with Rogers and as soon as my contract ends, I'm switching since Rogers has all features like RCS and WiFi calling to multiple different phones VS Telus that doesn't have these features to any phones or just certain phones for WiFi calling. It's ridiculous how Telus "support" lol these features in 2019.
0 Kudos
Reply

Any update on rcs? Telus last one to provide rcs support?
1 Kudo
Reply

I the issue is Telus not supporting it.
0 Kudos
Reply 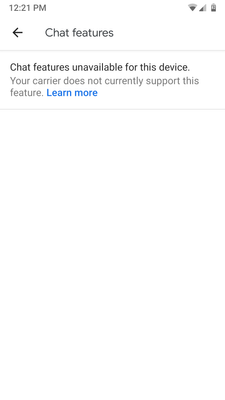 Hi
I got into the beta program and same thing cannot register.
0 Kudos
Reply

Hi
I just activate beta look for update and still cannot register as it still say that my operator do not support it. I do have latest version android also ona S10+.
0 Kudos
Reply

Actually, Google did release RCS and bypassing carriers but only in the UK and France for now. They mentioned they will release it in other countries in the next year. So Canada right now doesn't have it and still reply on the carriers unfortunately. I am part of the messages beta program and don't have the feature.
1 Kudo
Reply

Balou15
Just Moved In
In response to Mathieu
Options

frank_-_horrigan
Just Moved In
In response to Balou15
Options

Every comment I've read on Reddit and MobileSyrup has identified that the option to enable chat features appeared and then later disappeared. I've had the same thing. Any idea when it'll actually be working?
1 Kudo
Reply

I have the same issue. I have the 2XL and it showed up for 2 seconds and disappeared and I haven't seen it since. Why won't Telus respond?
1 Kudo
Reply

Anonymous
Not applicable
In response to BillTelusCust
Options

What happens when you're in the United States with Rogers on Wi-Fi Calling and dial 911?
Where does it do? Does 911 in the US close to where you are pick up or does Canadian 911 pick up?

That might be the reason why TELUS doesn't allow it.