Very professionally done. You should really remove this page and put 'updates to come to Android phones one day, we're not really sure when.' I think I will be switching phones to the nexus devices to actually get updates faster than this half a snail's pace. The Telus experience is not one I'm impressed with. Makes me consider switching providers.

It will be delays on Samsung's part. They are notorious for massive delays in releasing updates and patches. Worse than all other big manufacturers. There are also different releases based on country / region also. Samsung always releases updates in Korea followed by the USA first. Then they often delay other releases when bugs surface from the initial one.

As for Blackberry, they have a more stock version of Android that needs far less tweaking than Samsung. They also have a much smaller product line than Samsung. Both result in faster releases.

That is just not true. Samsung has been good at pushing updates throughout Europe , Asia and the US. It's up to the carrier to get into gear and test the firmware and release it. Most carriers around the world released the may, June and recently the July update. Rogers has been the worst so far. Telus and bell are better but not that great either. The priv being close to stock has nothing to do with a security patch, this isn't an upgrade from 6.01 to 7.0.
1 Kudo
Reply

BlackBerry OS 10.3.2.2888 has been released by BlackBerry. When can we expect Telus to release it?

I wish you'd just have the decency towards your customers and admit you're not on track. Instead you're blaming the phone manufacturer. It's just embarrassing.

Little tip: how about you stop removing the data toggle from the quick settings on your Samsung firmware. Would probably save some time and your customers, who would like to control their data use conveniently - as intended by the phone manufacturer - wouldn't feel cheap shot.
0 Kudos
Reply

Has anyone gotten the Moto G 3rd Gen security update that was supposed to roll out today? My device says I'm up to date. Also will it be bumped up to 6.0.1 with the new emojis or will it will be 6.0 with an updated (hopefully July 5th) patchset?
0 Kudos
Reply

So is the 3rd gen Moto G not going to see that security update that was supposed to roll out on the 14th of this month? It's removed from the software update table and my device is still on the December patch with 6.0. Come on, TELUS! Release the update already!
1 Kudo
Reply

I have a 1st gen Moto G.  The Lollipop update introduced problems with no sound during calls This happened to me after plugging it into a usb port (to charge) on a device that also allows USB media transfer (which i didn't even care to use).  No clear fix at present except factory reset which I'm getting rather sick of doing and it only crops up again anyways.  I've hear marshmallow builds don't have this problem so I'm hoping Telus, being the caring people they are, will release this for my rather old phone which is now severely compromised as an actual phone but still works great in other respects.  Any news on this?

Is there any timeline on when the GS6 will get the latest software/security updates? I see the GS7 and GS5 received updates recently, but no mention of the GS6.

@darderb A number of folks received an update to Galaxy S6 edge a week or so ago. http://forum.telus.com/t5/Mobility-Services/6-s-edge-won-t-Connect-to-wifi-after-did-it-uodate/td-p/...
NFtoBC
If you find a post useful, please give the author a "Kudo"
1 Kudo
Reply

I just thought it was odd that the GS7 received the update, but not the GS6. I'm not having any issues with my phone, nor am I in any rush to update it. You would think if they updated the Edge model, they would update the standard as well.

Apparently there are enough differences, that the basic software is different. LTE or VoLTE came to the Galaxy S6 before the S6 edge.

12:00am EST just received the Bug Fix + Security Update on my Galaxy S7 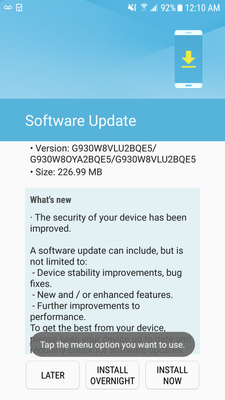 I got the update about a week ago.... i didn't notice anything different but my phone still seems to drop calls after 45secs to 1m30secs seems to be either a phone issue or a telus issue but they did reboot my phone on thursday and told me to try it and see if that solved my issue, I told them if it didn't i was going to run it over and send it to them and claim it against my accidental breakage and get another phone maybe the iphone but i don't want to give up an android yet

Just got another updated after the June 19th update today June 20th.  It was small, 200 some MB.

Anyone know what this was for specifically??

Was it the Carrier Update, which often arrives shortly after an OS update?

When will the Samsung A5 SM-A500W Marshmallow 6.0.1 update be released? It appears Rogers is being pushed, when will TELUS push its version?

Please have a look at here as well as here this is the latest information that is known. How far a long in testing is not divulged to us.

did you get yours updated?

johnshaft
Just Moved In
In response to parabellum
Options

Where is the November 14 update for the Samsung Galaxy S7? Has it been delayed or is it being skipped? I have not received the update and all carriers except Telus have pushed out a November update.

The dates are tentative +/- subject to change. Not etched in stone so to speak. Once it passes all internal testing it will be pushed out.